How to print Excel spreadsheet on one page

Repeat column A on every page in Excel

How to set Row 1 to print on every page

How to subtract in Excel 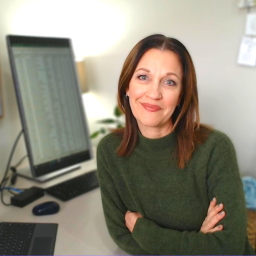 Let me help you learn how to subtract in Excel.

It's simple when you're shown how, but read to the end to make sure you understand what happens when you multiply and subtract, or divide and subtract in the same formula.

This is a tricky one, so please don’t skip over it!

How to subtract in Excel

Let’s look at writing a subtraction formula in Excel.

In the example below we are going to take away or subtract the money that we've spent from our budget, to calculate the difference. The result will be held in cell C4. Step 1: select the cell that will hold the subtraction formula and then press equals

When you're writing a formula within Excel, whether you're doing multiplication, addition, subtraction, division, you always need to click on the cell where you will be typing the formula first.

In the example above this would be cell C4.

Once you’ve done this you need to tell Excel you're about to do a calculation.

We do this by pressing our equals key (=) on the keyboard.

You’ll find your equals key top right of your keyboard, near your backspace key.

When you press equals, you're now saying to Excel, "Hey, I'm about to go and do a calculation" and Excel sits up and takes notice.

Although Excel will always give you the correct answer when you subtract this way, this isn’t always the best way to subtract in Excel.

Let’s look at this method first and then I’ll explain why this isn’t always the best method.

In the example below 1000 has been typed after the equals sign.

The subtraction or minus sign (-) has then been typed. You can find the subtraction symbol on your numeric keyboard, or just to the left of your equals key on the keyboard. We perform the calculation by pressing the Enter key on the keyboard. 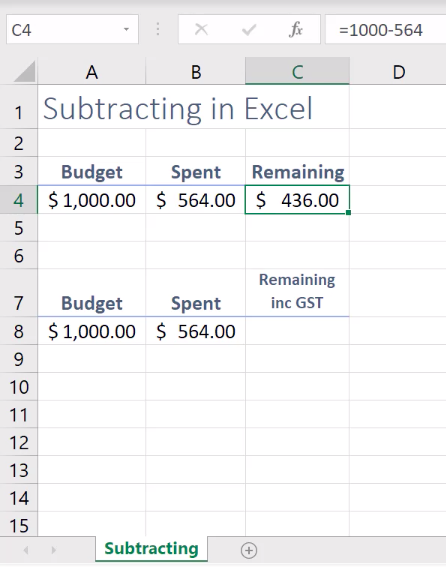 Excel will perform the calculation and give us the correct answer. You will be able to see the result down on the grid part of your worksheet and the formula up in the Formula Bar.

Wouldn't it be great if when we updated the value in A4, the Remaining value in C4 immediately updated to reflect the difference?

So, let’s look at creating a subtraction formula in Excel using cell references instead of real numbers.

In the example below I’m now referencing the cells holding the information.

The formula is =A4-B4, meaning you are now asking Excel to subtract the value held in cell B4 from the value in A4.

The beauty about this, is when you reference cells, instead of the real numbers, should you update a value in a cell used in a formula, the result will automatically update. 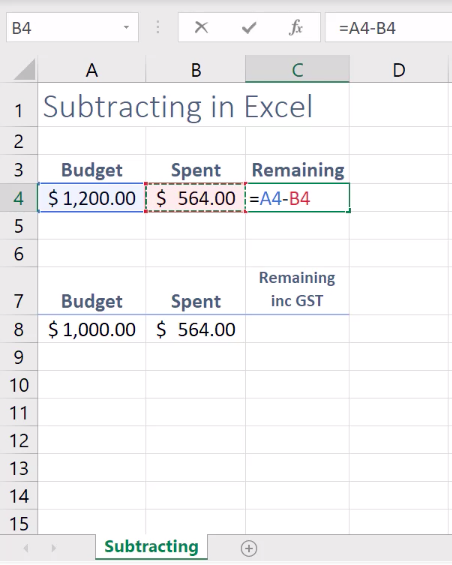 Tip: if you wanted to, you could actually type =A4-B4 into the cell. You don't need uppercase A, uppercase B. A quicker way to place cell references into a formula is to press = and then just click on to the cell you require and the cell reference will be added to your formula (you can see me doing this in the video at the top of this blog)

It's really important that you understand what can happen when you're creating formulas with more than just the subtraction or minus sign. Let’s say you needed to create a formula that included a subtraction AND a multiplication.

There is a key element to these formulas that you need to know to avoid incorrect calculations. The problem is I've ended up with a figure that is actually less than what we had originally in C4.

So, let me explain what's happened.

When you have more than just the subtraction symbol in a formula, you need to look at that formula and think, "What part of this formula needs to be calculated first?"

There is a rule behind this called the BEDMAS rule, also known as the BODMAS or PEDMAS rule.

A simple overview of this rule applied in Excel is this. If you are looking at a formula, and a certain part of that formula needs to be calculated first, you put brackets around it.

Without the brackets, Excel is actually whipping onto B8 and multiplying that by 1.15 first, then it's deducting the A8.

All you need to remember is that when you have more than one operator, for example, a multiplication sign, a plus sign, or a division sign, included with your subtraction sign in a formula, make sure that you bracket the part of the formula that needs to be calculated first.

That's it. That's all you have to remember.

Take a look at the formula and the result now that we have included brackets. 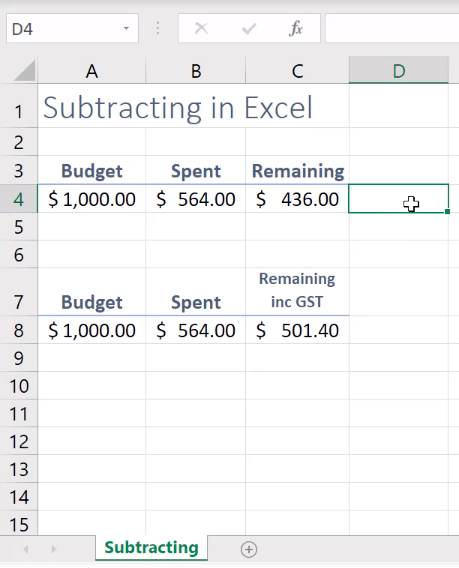 The brackets around the A8 minus the B8, means that Excel will calculate this part of the formula first.

Excel will then take the result if this calculation, and then carry on and multiply by 1.15.

I really hope you're feeling confident about subtracting in Excel now.

Just remember to use cell references instead of real numbers if you're going to update the cells regularly, and don't forget your brackets.

Use the same steps as above to create division, multiplication and addition formulas in Excel.

The table below shows the standard operator symbols that are used in Excel for these calculations.

Please log in again. The login page will open in a new tab. After logging in you can close it and return to this page.

We use cookies to ensure that we give you the best experience on our website. If you continue to use this site we will assume that you are agreeing to our Cookie Policy.OK, I understandPrivacy policy